“My greatest fear is of stagnation, which encourages me to flow quickly and unceasingly. I need to slow down some — any recommendations dear rivers?”  — H

Dearest H — This year a neighboring town retained me TO INVESTIGATE YOUR FIRST SENTENCE.  I am not kidding!.  The Town Council wanted “to improve the stagnant abandoned side channels of Tongue River” in the untamed section of their diverse park which also includes the active river channel, a skateboard park, horseshoe pits, gazebo, and soccer fields.

The season is early, yet already you can see the 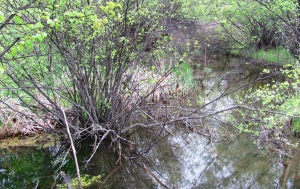 water surface growing various greenish mats; other slimy plants rising from below to clog the water; and the bottom deep in oily goo.  You’ll have to imagine the tangy aroma and buzzing mosquitoes.

What follows is my attempt to convey the tone and content of several hours spent with Tongue Oxbow – communication was less verbal than with other water bodies.  And very deliberate.  I couldn’t always differentiate my thoughts from the water’s.  I felt them being identified, questioned at the most basic level.

Stagnation is something to fear.  Oh? Well. Well, there’s no movement. {Energy flows here… in a different way… nourishing.}  So stillness is scary? It’s the stink.  And it’s messy. Stink? It’s the decay.  This place reeks of death, not  life.

A grief-stricken, terrified woman in physical pain is dissembling in front of us.  One person rises, moves to stand behind the woman, places her hands on the woman’s shoulders.  That’s all.  The woman draws a few shuddering breaths, then she sighs.  She isn’t transported out of what’s happening, in fact she is more able to deal with it.

What would have happened if that person had skipped lightly over and started chatting the woman up?  A certain environment distills such a person:

January — “I have thoughts triggered by the question, “Are you living or dying?” I have pondered it while walking. Having been … supporting patients and their families since 1993, I have witnessed much suffering (most of it clean pain, to use Martha Beck’s term) and the dying process up close. I have had an epiphany in the last 5 days…  Just as love is not the opposite of hate (indifference is the opposite of both), death is not the opposite of life. Death is a part of life.”

Is not death teeming with life?

I describe the insect, amphibian, bird, and mammal sign in their wetlands; the narrow, low paths and forts created by kids in a wild place so close to home.  I recommend only that they buy bat houses to cut down on mosquitoes.  They seem relieved.

Looking again at Tongue Oxbow’s so-called stagnant channel, it feels serene and almost shocking fertile – a respite from the quick and so-called civilized. Like that caregiver.  Your gifts are palpable, dear H.

With love and admiration,

PPS — A second stream wanted this post.  She explains that you already understand the  value of slowing down and merely asked HOW.  Wetlands are not the only leisurely water.  Indeed, she IS just the one to tell you about another great option — I’ll transcribe her comments… after I relish a nourishing bit of stagnant percolation.