Beavers and dam engineers share a secret — they must, right? After all, natural dams don’t last long and neither do most personal dams.

Remember the last time a landslide slumped into your river/life? The ever-present pull of an unseen sea powered the river water and your attention to cut a way over, under, around, or through that blockage within days. (You can accelerate this most basic nuts-and-bolts form of personal dam-busting with the basic practice of inquiry described here.)

But dams designed by clever minds, ah, those can last for centuries IF (AND ONLY IF) the beavers/engineers build and maintain a generous spillway. Let’s exploit that condition, shall we?

The power of the sea’s pull

A river will erode any dam eventually because water keeps flowing into the reservoir behind the dam, pulled by the attractive power of gravity. Pressure increases against the dam and at some point it develops a leak or otherwise overwhelms the structure… no matter how strong the material or deep the foundation. Guaranteed. That’s why a good dam designer incorporates a spillway to bleed off high levels of water.

By the way, the “lizard” or “social self” part of your own mind is a brilliant dam designer. It’s not evil — it just misguidedly decides the safest strategy for surviving and thriving is to divert your energy for some outside interest that doesn’t care for your naturally wild and scenic river-self. I assure you, that part of your mind isn’t right.

*What is some general area of your life where you feel dammed (i.e., not making much forward movement in the direction you desire, not getting your life’s work done, cold, weirdly deep and wide, and often well-used by others or the culture-at-large for recreation, irrigation, drinking water for humans or even livestock, or actual power generation)? Don’t get specific or analytical about causes or anything at this point.)*

To free your river from this or any dam, all you have to do is find a spillway and shut it down.

How to recognize a spillway

The problem is this: a spillway kind of resembles natural flow. You may be fooled into thinking it’s a good thing because, well, it seems some of the river water is making its way downstream, right? No, a spillway is never helpful if you want to be rid of a dam. Remember, a spillway single-handedly allows the dam’s survival.

Careful study of real-life spillways shows exactly how to identify these “faux-joy” culprits:

~ Spillways are not built by the river itself. You didn’t “hand-make” this kind of flow in your life. It’s not unique to you, to the flow of your desire, to the particular conditions you find yourself in. 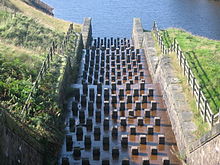 These patterns are meant to disperse energy on the spillway so the water is less “hungry” when it hits the natural channel downstream of the dam.

~ Spillways are always very strong and stable. They don’t erode or change over time. THEY ARE NOT AFFECTED BY YOU.

~ Spillways are either very smooth and straight or have some regular pattern. They’re not randomly bumpy or curvy.

~ Spillway water is unnaturally cold and “clean” — and not in a good way. When river water moves, it has power and does work. And a river’s life’s work is moving sediment. The river carves off, picks up, carries, and sets down little bits of the world it encounters. But the water behind a dam can’t do its life’s work. The sediment settles out at the bottom, and the water that spills through the gates is sterile — devoid of the experiences that healthy rivers and humans carry and care about. 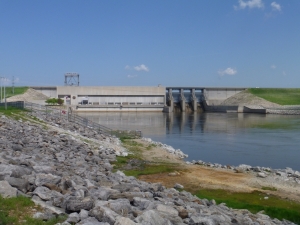 Photo from High Plains Fly Fisher — click on photo to visit the blog. Even though they aren’t scenic or healthy, these tailwaters are popular with fishermen because fish congregate there..

Because it’s moving fast and is clean, the spillway water has a lot of power — hydrologists say it’s “hungry.” It devours the first non-reinforced thing it finds: itself. It ravages the banks and bed just below the dam. That’s why you see so much artificial armoring of the river channel just below a dam.

*Where in your life does your energy and attention SEEM to be directed in the right direction — heck it even feels like you’re embracing risk and doing the hard thing as so often touted by coaches and self-help gurus — but it sounds like the above characteristics and in fact does not seem to get you unstuck?*

If you want to be sure not to confuse a spillway with a leak (which we love because THAT’s how you bust a dam for sure), go here for details.

What do you plug the spillway with?

Short answer: Anything that works.

Typical answer: Close the gate. The thing is, that’s often not doable from inside the river itself. You usually have to have help. Hire a monkey wrencher, a therapist, a coach if you can. It is so worth it.

Long and hopefully more helpful answer: Block the spillway with river sediment, i.e., new thoughts about the past.

I know it’s nice to be forward thinking, but that’s not what sediment is. Sediment is actual pieces of where the river has already been. There are many places in river restoration where we focus on the future and new possibilities, but I find that closing up a spillway requires very specific attention and language that attends to the past.

I also know it’s hard to figure out how to dredge up the past and apply it in a new way to fast-rushing parts of life. Again: hire someone to help you! This is your life we’re talking about; it’s worth the money and time and nerves. Meanwhile, here are some specific bits of sediment — some new thoughts about the past — that I have found work when spoken aloud. These statements are carefully crafted: they are truths about the past, yet, interestingly, they do not have or need content-specific information:

“Doing this — this “spillway” — did/has not resulted in my flowing freely or feeling un-dammed.” (Note: It’s good to remind yourself that if the spillway had worked to make you happy, you wouldn’t be trying to close it. This isn’t about some abstract moral issue or some way to please others. It’s how to truly care for and restore your river. And that will benefit the ecosystem around you, so don’t worry about being selfish.)

“Doing this was a diversion or spillway perfectly designed to keep my internal power low and benefit others, the status quo, or the culture at large but not me.” (Note: I’m not saying it was intentionally designed to operate this way — maybe it was in some cases or maybe not. It doesn’t matter. What matters is that it DOES perfectly function this way, preserving the dam.)

“Doing this in the past didn’t work to make me feel well and truly happy.”

“This looked like the real thing but wasn’t. It didn’t effectively create a wild and scenic river/life but actually allowed a dam to exist.” (Note: Maybe even a dam you couldn’t identify but could feel.)

“This seemed to taste of freedom but was pseudo-freedom followed by a crash and a ravaging of my bed and banks.” (False happiness and false river flow always has that crash afterwards. Life as a real free-flowing river does not. It’s less dramatic usually, but wilder even while it’s peaceful.)

Once you’ve attempted to plug a spillway, immediately turn your attention back to your longing sensation. Even if you can’t stop sending your attention down a known spillway, don’t despair. In the real world of dams, most leaks and dam failures occur when spillways are still working — it just takes a little longer. So try this spillway-plugging, and then, no matter what, return to playing around with your own delightful little leaks. If nothing else, it just feels good, and that’s success in its own right.

Keep tuned for a fun and simplified dam-busting worksheet — I’m developing it in collaboration with one of the coolest rivers around! Until then, good luck experimenting on your own. Busting dams is the hardest and most profound personal and river restoration work there is. Please get help when in doubt and be gentle with yourself — if you end up staying dammed for awhile more, it’s not a big deal. You are fine the way you are; this stuff is just the gravy. Let me know how it’s going or if I can be of any support to you. I’m delighted to be of service AND your comments will help me with the worksheet I’m developing.